There’s no end in sight to how many colorways Nike releases and how many concepts artists drop on the Air Force 1 Low. There are a plethora of actual colorways out there, so much so that it can actually be difficult to drop more concept art as a lot of the color combinations have already been implemented. Thankfully, there’s no end to the creativity of concept artists and if they can’t come up with something entirely new, they make improvements on colorways that have already been released. This time, we present the Nike Air force 1 Low Flaming Graphite. A Colorway that in our opinion, is an improvement upon the sneaker that Nike dropped for their 75th anniversary!

The Air Force 1, at the start, actually sat on shelves. Although that may be hard to believe now, it actually did happen. At the time, the Air Force 1 was worn by the NBA’s most successful basketballers but it still did not translate well into sales. After a year of releases, Nike started to think about discontinuing them and did so for a brief period. The city of Baltimore, however, proved to be a turning point as demand there was still high. The success there eventually convinced Nike to return. If it wasn’t for that, we probably wouldn’t be getting fire concept art such as this Air Force 1 Low Flaming Graphite.

These shoes feature black leather toes, mudguards, and side panels with two small perforations. Heel tabs, on the other hand, don a dark grey shade which mixes things up. The toe boxes blend right in with perforation, sitting below grey leather eye stays on the bottom and sides of the throats. Speaking of which, throats are black and wrapped with traditional black laces, leading up to a pair of black tongues with contrasting red tags, detailed by black “Nike Air” branding.

Sock liners and interiors also don a grey hue, likely leading down to black or grey insoles with contrasting Nike branding. Rears also are not visible; however, we can just make out a black shade. These likely also feature red matching embroidered branding. The highlights of the sneakers are likely the vibrant red “Swooshes” on the sides that provide ample contrast. Black midsoles with embossed “Air” branding and matching red outsoles finish off the design. For more content such as this, stay tuned! 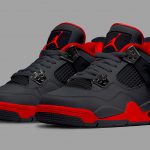 A Spin On A Classic! – The Air Jordan 4 Varsity Metal Grey

The Air Jordan 4 returns for yet another classic release in the form of concept art and... 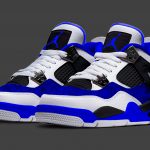 Another One for The Paisley Pack!-The Air Jordan 4 Military Blue Paisley

The Eastern patterns known as “paisley” have become quite popular embellishments on the revered Air Jordan 4.... 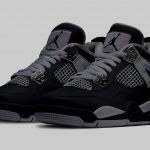 The Air Jordan 4 remains a fan favorite, possibly even more so than the iconic Air Jordan... 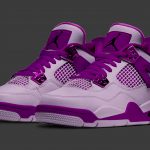 Continuing our recent run of flower-inspired colorways, have a look at our latest take on the Air... 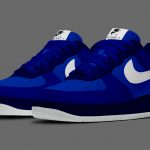 For our latest concept, we are revisiting a once common source of inspiration for us, the ocean,...